*This is not the song by Ice Cube, sorry. This is paraphrasing of my Toastmasters CC2 speech. Enjoy*

In 2008 there were 29 teenage murders in London. On a near daily basis the papers and telly would go on and introduce the latest victim and profile some of the gangs in killings. The city and country were in utter shock and in a state of panic. At the height of this murder wave, then London mayor, Ken Livingstone went on television offering his expert opinion on what could be the cause of this horrendous phenomenon. To little surprise, at least to myself, he placed the blame on rap music. He went on about how the art form is a scourge that poisons the minds of the youth with its glamourisaton of guns and violence. At that point I mentally logged out, switched off the TV, reached for my beloved 160gb silver iPod.

I put on my headphones and indulged in my favourite pastime; listening to rap music. Little known to Mr Ken and his type is the fact that rap music is an inspirational and aspirational art form. I have previously listened to rap for entertainment and to learn English and isiZulu when I was younger. Little known to myself was that the secret to my success was kept between the beats and bars trapped in that iPod. What I am getting at is that it is rap music that guided me into positively obsessing about ‘making it’. And to me making it means i) leaving a strong legacy, ii) achieving financial success and freedom, and iii) living a long and healthy life. Weird, isn’t it? A young professional giving credit for his success to rap music?!

Rap?!! Yes! Gangsta rap made me do it. If I were to be put on the stand in my old age I would gladly testify on the inspiration of my successes. I would testify how hip hop gangsta rap motivated me to study, achieve, live well and inspire.

Here is how rap has been grooming me;

The rhythmic poetry of Eminem, Common, 2Pac and Proverb taught me about harnessing knowledge of self and street/environmental awareness. Common themes included ‘keeping it real’, outfoxing your enemies, introspection, gratitude for life and opportunities, and assertiveness.

Before Juju and Floyd had the E.F.F, before Mandela and Mbeki’s B.E.E. I had the W.T.C., which is the Wu-Tang Clan telling me about CREAM. Cash Rules Everything Around Me. Another inspirational rap character Jay Z preaches and practices philanthropy, generational wealth accumulation, investing, diversifying in business and also encouraging prosperity.

Well, not in rap. In fact rap music’s lyrics are consistently filled with tales of drugs, violence and promiscuity. So in this instance I saw that this was a clear wrong and not something to look up to. With album titles such as ‘The Chronic’, ‘Get Rich or Die Trying’ and ‘Ready to Die’ sometimes all it takes a is wrong to appreciate what is right.  Rappers’ high mortality rate and low life expectancy helped me to appreciate healthy living, diet and mental wellness. I read a whole lot so that I do not come across as daft as some of my favourite rappers.

With that being said I have learnt so much more right than wrong from rap.  When faced with the prospect of a live of poverty hip-hop chooses to hustle. When stealing seems the way to go rap teaches one to create value. When life is boring and repetitive rap music offers creative and inspiration entertainment for the young and young at heart. 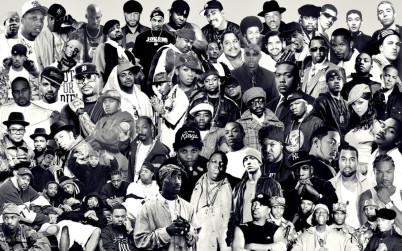 Although they are being constantly accused and blamed for the world’s ills my unlikely heroes and inspiration in life are those caricature guys in baggy jeans and oversized shiny watches. Through their reality and aspiration based rhymes these fellas are guiding me towards my life’s goals of leaving a strong legacy, achieving financial success and freedom and living a long, healthy life. When the world admires my success I will be the first to proudly claim, “Yes, gangsta rap made me do it! “

4 thoughts on “Gangsta rap made me do it”